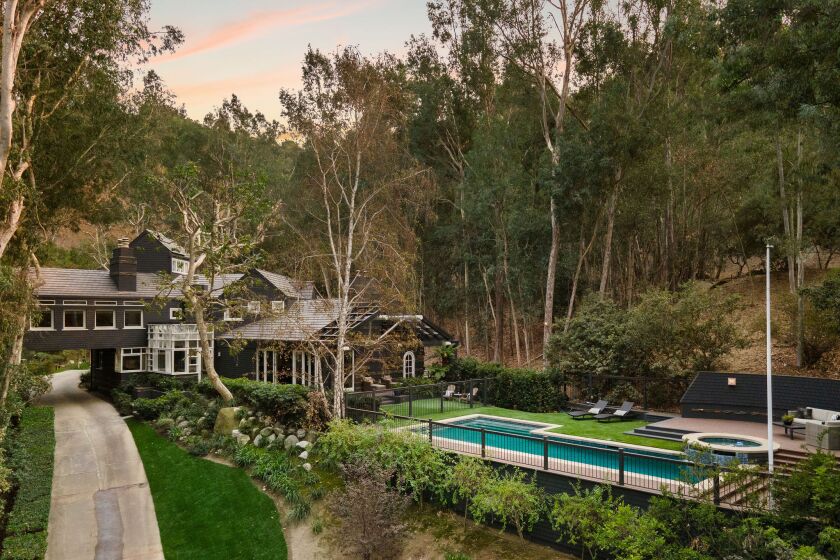 Welcome back to the Real Estate newsletter. In a week that saw a billion-dollar deal and an agreement to build nearly 20,000 new homes, why don’t we instead focus on a house hunt that hasn’t even happened yet. Just for fun.

USC dropped a bomb last weekend when it announced Lincoln Riley as its new football coach, stealing him from a University of Oklahoma program that was a perennial contender during Riley’s tenure.

Contract rumors started swirling immediately — with one claim that USC had bought Riley’s homes in Oklahoma already debunked. A claim of a $6-million housing allowance, however, isn’t entirely far-fetched. Housing allowances are nothing new for top-tier coaches. So naturally, we helped Riley get a head start house-hunting and found six homes for $6 million around Los Angeles County.

On the celebrity side, Dolph Lundgren sold and Tyra Banks is trying to. The former unloaded his modern mansion in the Hollywood Hills for $3.71 million, and the latter offered up a similar-looking place over in Pacific Palisades for $7.895 million. Banks is a veteran of the Palisades market at this point; since 2018, she’s flipped four homes in the coastal community.

This week also saw the conclusion of a two-decade development battle about 70 miles north of Los Angeles, where Tejon Ranch Co. and environmental nonprofit group Climate Resolve agreed to the construction of 19,300 “net-zero” homes near the Tehachapi Mountains. The project had stalled for reasons both environmental and economic, but the agreement addresses concerns by including 30,000 electric vehicle chargers and requiring funding for fire prevention measures.

Million-dollar deals turn heads in the world of residential real estate, but there’s nothing like a billion-dollar commercial deal to put things into perspective. This week, ViacomCBS agreed to sell the CBS Studio Center — home to shows such as “Seinfeld” and “Gilligan’s Island” — for $1.85 billion. The mammoth deal is one of the largest ever for a TV studio complex in L.A. and highlights the value and scarcity of TV soundstages as companies crank out content for the growing number of streaming services.

While catching up on the latest, visit and like our Facebook page, where you can find real estate stories and updates throughout the week.

Lincoln Riley, USC’s bombshell pick to rebuild the Trojan football team, is moving from Oklahoma to Southern California soon, and he’ll have plenty of money to spend on a new place.

Contract details are still hazy, but he’ll surely make more than the $7.672 million a year he earned at the University of Oklahoma, where he was the fifth-highest-paid coach in the country, according to a USA Today analysis in October. Riley led the Sooners to 55 wins in five seasons.

Rumors of a $6-million housing allowance seem realistic relative to other USC coaches. Steve Sarkisian dropped $8 million on a Rolling Hills home when he took over the team in 2014, and Lane Kiffin paid $5.5 million for a place in Manhattan Beach a few years before that.

Even in a market as hot as Southern California, $6 million goes a long way. Riley can buy a quality home in even the most exclusive neighborhoods. Bungalows near the beach or mansions in the mountains are all within his budget.

Here’s a look at what $6 million buys in six Southern California communities.

Dolph Lundgren has won his bout with the Hollywood Hills housing market, selling his modern, boxy abode for $3.71 million.

The Swedish actor and martial artist — famous for playing Ivan Drago in “Rocky IV” and starring in other action films such as “Masters of the Universe” and “Universal Soldier” — had owned the property since 2018.

Built in 2009, the hillside home combines a rugged design palette of steel, concrete, stone and glass across 5,230 square feet. A ficus garden marks the entry, leading into a three-story floor plan that ascends to a rooftop deck overlooking the city below.

Tyra Banks aims for a fifth

Although Ellen DeGeneres may be Southern California’s most prolific celebrity house-flipper, Pacific Palisades is Tyra Banks’ territory. The supermodel-turned-actress-turned-reality TV host has flipped four homes in the coastal community since 2018, and she’s looking to sell her fifth and final property for $7.895 million.

If Banks gets her price, it’ll be a profit of $900,000 compared with what she paid for it in 2018. She’s made a few changes since then, adding several striking chandeliers and remodeling the kitchen with a breakfast booth and tile backsplash.

One of Southern California’s longest-running development battles ended after two decades Wednesday when an environmental group agreed to the construction of a massive “net-zero” greenhouse gas community of 19,300 homes just off Interstate 5 on the southern flanks of the Tehachapi Mountains, writes Louis Sahagún.

The pact between the Tejon Ranch Co. and the nonprofit Climate Resolve comes amid a severe housing crunch across California and removes perhaps the largest roadblock remaining for the 6,700-acre Centennial project bordering Kern County, about 70 miles north of Los Angeles. The project had been stalled repeatedly by environmental and economic challenges, even as other large developments won approval in one of the last undeveloped sections of Los Angeles County.

The proposal had won final certification two years ago from the L.A. County Board of Supervisors, and the company declared that it had been vindicated. But earlier this year, Superior Court Judge Mitchell Beckloff rejected the county’s approval of the developer’s environmental impact report, effectively blocking construction.

The staggering price tag underscores the value — and scarcity — of TV soundstages in Los Angeles as content producers scramble for space to shoot TV shows and movies to stock their streaming services. ViacomCBS disclosed its plan to sell the property last summer.

The deal, announced Tuesday, represents one of the largest-ever real estate transactions for a TV studio complex in Los Angeles. In addition to the real estate assets, CBS will turn over its lucrative studio operations business, which includes stage rentals, facilities management and production support services on the lot.

Just in time for Christmas, the iconic house from “Home Alone” will be available to rent through Airbnb for $25. The home is in Chicago, but if you’re interested in living like a McCallister for a night, bookings open Dec. 7 at 11 a.m. Pacific time. NPR has the details.

Another day, another college housing snafu. Gov. Gavin Newsom set aside $2 billion for student housing during the pandemic, but California State University didn’t read the fine print, and it could cost the university system as many as 3,000 new student housing beds unless state lawmakers intervene, according to a CalMatters story published by the Daily Breeze.